The prospects didn’t seem good for the North Carolina Tar Heels in late January, when they lost back-to-back games to Miami and Wake Forest by a combined 50 points. At that juncture they didn’t have the look of an NCAA Tournament team, and certainly not one that would go very far.

Of course, BetAnySports customers have seen things change, in a big way. Hubert Davis, the program’s first-year head coach, put this team on the right path, and they’re humming. The Tar Heels lost to Duke by twenty points in February, but they really ruined the farewell party for Mike Krzyzewski, beating the Blue Devils in their home finale at Cameron Indoor and then on Saturday in New Orleans, as they advanced to the NCAA Championship game.

So they are right at the brink of a title, which they can win if they beat the Kansas Jayhawks in a game that tips off at 9:20 PM ET at the Superdome.

Kansas, now 33-6, is formidable, and they took care of business with some prejudice on the weekend against Villanova, never letting Jay Wright’s team in the game, running off with an 81-65 victory after jumping to a 10-0 lead. Prior to that, they had outscored Miami 47-15 in the second half to turn a Hurricane halftime lead into a rout. So they look very imposing right now.

But so does North Carolina. They have arguably taken the more difficult road to get here, beating Baylor and UCLA, in addition to winning the rubber match with Duke. There are several factors that make the Heels a tough “out” for Kansas in terms of the matchup. Are those factors enough to get the cover, or even the straight-up win?

You’ll see here that according to the folks at BetAnySports, the Jayhawks are the favorites in Monday night’s title tiff:

And by the way, Kansas is a -200 favorite on the money line to win outright, with the underdog Tar Heels posted at +170. 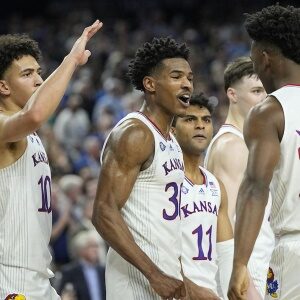 According to Pay Per Head Bookies, it will be interesting to see how Kansas goes about attacking the basket on the inside. They’ve got a weapon in David McCormack who really couldn’t be moved by Villanova, but he’s going to encounter some resistance here against Armando Bacot. There is a challenge to begin with because Bacot is more than prepared to duke it out on the glass with him.

North Carolina’s big man has been dominant of late; he is not only ranked #8 in the country when it comes to defensive rebounding percentage, but he’s been awesome on the offensive boards, with eight O-rebounds in each of his last three games.

The Tar Heels are not the kind of team where you can concentrate on stopping one man. They have spread the scoring around in this tournament, as everyone (save for Leaky Black) has taken turns exploding. Brady Manek has established himself as a force at the “stretch-4” position, with 54 points in his first two games. Caleb Love, who tallied 30 against UCLA, paced the team with 28 in the win over Duke.

Can Remy Martin get hot again off the bench? We’ll see. He’s been hot and cold. Can Ochai Agbaji remain hot from beyond the arc? We’ll see. He was kind of dormant in the first three games in the Big Dance.

Teams generally don’t get second-chance opportunities against North Carolina (2nd in nation in D-rebounding %). They are very solid at the line (76.3%). They do not send the other team to the line very much. And you can’t shut them down by slowing one scorer. This is not a bad recipe for an underdog.

At BetAnySports, you won’t lack for action!…… Aside from plenty of alternate lines, there is plenty to find with Prop Builder, along with a number of outlets for real-time wagering, and if you haven’t experienced it, you’re in for a real thrill………. Reduced juice is available, and that will give you a lot of value when you make your bet……. Of course, Bitcoin is accepted for deposits, and you won’t be charged a transaction fee!